skip to main | skip to sidebar

'The pen is mightier than the sword.' Edward Bulwer-Lytton, 1839 - Who/what would humans be without conflict?
- How does conflict shape who we are?
- Freedom, peace, justice, equality, love. What do these ideals
mean? In what ways can they be achieved?

Encountering conflict can be difficult. However, it is ultimately worthwhile. Bearing witness, acknowledging conflict, is how humanity can work to grow and evolve in a positive way. This is why your Yr 12 English study of the Context 'Encountering Conflict' is so exciting. You have the opportunity to go on a journey where you can consider the world from many different viewpoints and through many different mediums. You can inspire and be inspired, you can have your say, you can affect change in the world - locally, nationally and globally.

This blog is intended to be a portal that will transport you into a place where you can consider the Context in a way that allows you to share your thinking and ideas. It is designed to let you:

- learn about the set texts; The Secret River by Kate Grenville and The Rugmaker of Mazar-E-Sharif by Najaf Mazari and Robert Hamilton

- study language features that occur in the set texts

- practise different forms of writing in a forum where you can recieve feedback from teachers, experts and peers.

There are a number of areas for you to access and contribute to in this blog. They are:

- Conflict Concerns: is the blogging space on this home page for general discusssion about the context and set texts. Exploration and challenging discussion about 'Encountering Conflict' is the aim. Also, questions about the course and what you are meant to be doing can be shared here.

- Music Matters: a space to share and comment on music that is relevant to the Context. You can also discuss how the songs might relate to the set context in ideas, themes, values and language features.

- Text Tremors: discuss how written texts have moved and shaped your ideas in regards to the Context.

- Film Flogging: inspire others by sharing your thoughts on how films, documentaries and t.v. shows you have viewed encounter conflict in their narratives. Comment on parallels that may arise between films and the set texts.

- Picture Panic: share images that make you think about the context and the world you live in. Explain how the pictures you encounter represent the idea of 'encountering conflict' and how they impact on your view of life and how it should be lived.

- Prompt Response: respond to prompts that you have been given and that appear in this space to practise writing 'Creating and Presenting' responses. Upload them here for conferencing that will help you hone your skills to meet the criteria for this area of study to the best of your ability in SACs and the exam.

Use the VCAA website to help with all your areas of study. Find study designs, past exam papers and advice from assessors about what makes a top notch response.
Posted by katieb555 at 9:46 PM No comments:

Lots of interesting and varied perspectives feature in these Q and A episodes that link to themes and ideas arising from 'The Rugmaker'. Enjoy...be inspired...develop insights...use them to inform your SAC pieces. 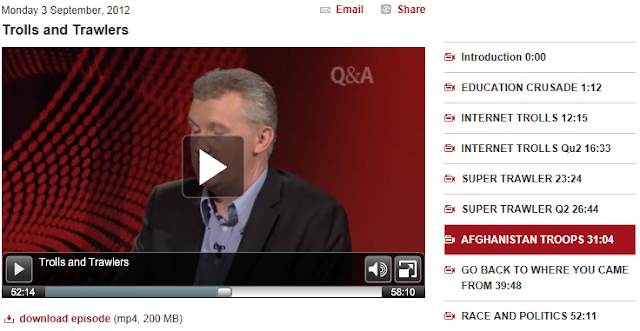 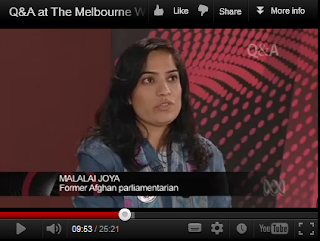 Getting to know Najaf

• In the late-1980s the former (Soviets) dropped a rocket on his family home, killing his brother and brother-in-law, and permanently injuring his mother and himself (he suffered leg injuries).

• The Taliban murdered his uncle and cousin in 1998

• Washed dishes for a dollar an hour

• A member of the Hazara ethnic minority

• The Taliban murdered his uncle and cousin in 1998

• As a child he had a bomb dropped on his home, it killed his brother and brother-in-law.

• He then got a job at the rug repair shop. He loved going to work.

• He married his wife and had a daughter.

• He got captured by the Taliban, and put in a room with many other Hazara men. They took them out one by one and tried to make them admit to killing Taliban, and some men admitted to it just so they could die and escape the whippings.

• He was released from this place and decided to flee to Australia.

• He was kept in a detention centre for four months.

• Najaf was then released and bought a building to open his rug shop.

• His wife and daughter were then granted entry into Australia and they gained citizenship.

• In the late-1980s the former (Soviets) dropped a rocket on his family home, killing his brother and brother-in-law, and permanently injuring his mother and himself (he suffered leg injuries).

• The latter (Taliban) murdered his uncle and cousin in 1998 by setting their house alight.

• He travelled by car to Pakistan, then by plane to Indonesia where he boarded a small fishing vessel with 96 other asylum seekers.

• He was incarcerated for four months while his case was assessed.

• He witnessed acts of frustration and despair, including detainees cutting themselves.

• He moved to Melbourne hoping to find factory work.

• He sells all manner of rugs from Afghanistan and India, and carries out repairs sent to him from around the country.

• He went on to work with carpet and rug manufacturer Customweave, before friends helped him open his own business, Afghan Traditional Rugs, in 2002

• One customer has since become his "Australian mum". Robin Bourke, a retired teacher from East Hawthorn, was looking for a cushion cover but ended up with a new student. Now Mazari visits Bourke and her husband on Thursday nights for a meal and an English lesson.

• Mazari's life has been enriched since he was granted permanent residency in July.

View all our pages. Valid, respectful comments about our posts will help our learning.

Yr 12 VCE Encountering Conflict Context Blog by kb555msc is licensed under a Creative Commons Attribution-NonCommercial-ShareAlike 3.0 Unported License. This only applies to the original material created by members of this blog. Material used for discussion and analyses aims to be within the ideal of 'fair use' with referencing and hyperlinking to acknowledge sources.